Just Not That Into You

The innkeepers don’t know us. No online forms are filled. No credit cards or payments are asked in advance. No deposits. It’s a phone call on skype that lasts less than 5 minutes, followed by an email. They are going to be away for the weekend…a surprise birthday party in a gringo beach development of San Juan del Sur. We can stay under the condition that there will be no breakfast for the 2 days they are gone. There would be the guard, the maid. It is a cloudless arrangement that we gladly accept. For in exchange, we get the #1 B&B in Granada, Nicaragua all to our selves.

A fantasy comes true. Too easily…eerily. What’s the catch?

Teenagers with the run of the castle while the parents are away. Our room is large and luxurious. The courtyard has a fountain. Beaming polished wood floors and ceilings. A chandelier hangs over the bed. A wild garden with mellowing leaves and hidden fruitfulness. Tropical flowers that resemble the plumage of a firebird, sits as a bouquet next to our bed. A dip in the pool where the bats swoop down for a little aperitivo while the sunsets. 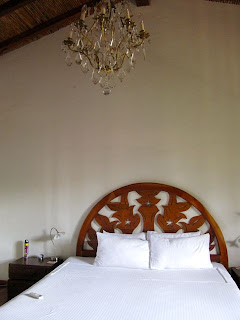 When we finally meet the young british couple, the night they return, we’re surprised to find that they are much younger than we are. They look like the cool kids in school and me, the loner. I’m immediately smitten. From the outside, Liz is beautiful, hair spun of gold…yet she looks like Loba, the rescue dog they have been fostering back to life…malnourished. Martin is short, pimples on blistered skin. He shows us pictures of his Frankenstein mobile, a car being built custom. Their hats lay on the table…a trucker's cap and fedora. The old tape is replayed. Martin tells us that it’s his mother’s house. A swiss woman. A place originally intended as a family retreat. It all makes sense now, the loving details…the correctness of the tiles, the crystal knobs on the closet doors, the full sized bottles of shampoo and conditioner in the bathroom… 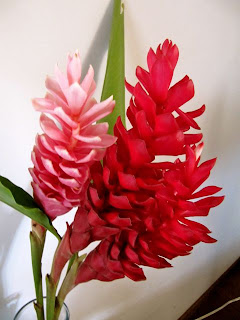 These people are from the affluent tribe of good taste. (A tribe I secretly pine for membership.)

They’ve been living in Granada for 5 months now. Like two seasoned tour guides, their affection for the city is overhyped. It’s the best place on earth…”it’s cheap” and everyone is “lovely.” Martin plans to stay there the rest of his life, according to Liz. The next day, the story sounds more sober, Martin confides that they don’t know how long they’ll be there…how long they’ll stay. They are no longer into the party scene like all the other gringos. But aren’t they gringos, I wonder?

Who cares about the inconsistencies...the illusion. I want to be in their company even though my gut tells me to run away. Quit being such a loner Mai! Something in me kicks up like a light switch. My voice raises a pitch when they’re close. Every evening, I hope they will offer us drinks, get to know us…but the moment never comes up even though we’re at the kitchen table every evening in front of our laptops. Why am I so drawn to these people?

In a short period, we end up collecting a lot of details. Their age. Where they went to school. What they majored in. Where they grew up. Horse riding. The rescue dog shelter. About the previous sister and her husband who ran the B&B, that there are hormones to make a pig mature in 30 days...

One morning, Loba walks around the dining table sporting a diaper. It is her “season” Martin explains in his british way. When she’s manages to bite the diaper off, a large mound of blood splashes onto the beige floor. There are squishy dark bits swimming in the red pool. Martin runs away and dials the dog shelter. A Russian woman soon emerges. She has a look of a tiresome saint, a body built like Notre Dame’s hunchback. I imagine her carrying both Liz and Loba on her shoulders…a trail of red paint against pavement.

We follow behind (a necessary visit for Biela’s ear infection and Manly’s irritated paw).

At the vet, Loba lies on her side. She looks peaceful. With her eyes, Loba tells me that Liz is her angel. She nestles her head on Liz’s thigh. I try and direct light into her but I can only see blood. I feel it’s not my place. Instead I just kneel quietly next to Liz and offer her support by being present and listening.

Loba is put down that day. A terminal tumor has been growing inside her kidneys.

Later that evening, Liz is in an oversized sweatshirt, her tan legs clean of the red stain. She looks exhausted, devoid of any feeling. She wants to watch girl movies and have a good cry. I want to give her a hug. I want to tell her to let it out. But I don’t…it’s not my place. I wish her a good rest instead. When we come back from dinner, we find Martin in front of a laptop by himself. The light flickers on the shadows of his face, the white noise of video games or loud talk shows cast the mood of the night.

One day, new guests join in for breakfast. They’d checked in the night before. Liz wears a black bra under a tight white shirt. Her face is painted; hair pulled back. I give Liz a hand written recipe knowing she loves to cook. She thanks me and quickly goes back to attend to the new guests; blends fruit shakes and makes them sausage and bacon. The guests wink at her. ”How about hitting the bars again later tonight guys?”

7pm the night before: Martin walks past us hurriedly a bottle hides behind his back as he wishes us a good evening. By midnight loud drunken voices awaken us amidst a barrel of bat squeaks.

The truth like a new pimple on Martin's face merges.

And I like pimples. I want to pinch and prod. I want to eradicate and heal even if it’s not my business. I’m drawn to the white heads like white lies even if they are meant to protect. Addicted. Addicted to old patterns, drawn to people who are too scared to feel or care. Who have their own issues and battles. Who’d rather play denial. But that’s ok. I can’t be too hard. I’ve played my share. But it’s not my role to fix anymore. I’m no longer the little girl holding mommy and daddy’s hands so they’ll stay together. It’s not my responsibility to change or make things better. I have a choice. After Honduras, all I wanted was to enjoy my stay, to be offered a welcome drink. To be treated like a guest…instead of being left like the neglected dishes in the sink for the maid to wash. 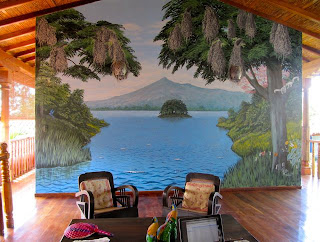 The maid offers to help us with our luggage as we load the car. Martin's pimples bury behind laptop. Liz her arms crossed. Her hair stands slightly on one side, disturbed from a nap. She compliments the ruggedness of the car, but it comes out quickly, sarcastically. I don’t blame her, its clear that she’d rather trade places. And I understand now why she hasn’t once asked us about our travels…the places we’ve seen. What’s the point when you’re stuck...even if it’s in a jeweled cage?

Last chance, give her our information? Tell her to keep in touch? That is was a wonderful stay? More of the grand illusion; here's lookin at you kid...

We part and hug goodbye.

I don’t know how to make friends. At 35, I still don’t have a clue.  They say that the people who are brought into our lives mirror who we are. They are our life's lessons and through us, we choose to take responsibility of our own roles.....or not. I don’t want the cliché anymore…the girl who chases after the bad girls and boys…the people who would rather hurt her because in the end, she only knows how to hurt herself.

By Mai Brehaut
Posted by White Shell Girl at 11:18 AM