The first drops of rain are washing the streets of San Francisco, cleansing the way for the new season, Autumn. When I think of rain, I think of my dad. At 73, he still works every day at my parent’s ice cream business. 7 days a week. But on the days that it rains, those are his rest days. When I was a little girl, those were the days we would be together.


At 7, I was already very independent (some might say defiant and stubborn). One day after school, I decided to walk home alone. Some how I managed to dodge the baby sitter standing with the swarms of parents in front of Slonaker Elementary. It had been a couple months since my mom and I moved from Arques, France to be reunited with my dad in San Jose, California. Even so, like a homing pigeon, I knew what streets to follow, the corners to turn to get back home. But without a key, I couldn’t get into the apartment.

So I waited. I waited sitting down in front of the door with my oversized backpack. I waited squatting next to the plants, bringing my head close the leaves and studying their hue and veins. I waited playing hopscotch, hopping with one leg on the stone pathway that led to the door and back. Each time, I’d turn and rattle the locked doorknob hoping that, this time, it would open.

And then, it began to rain.

I sang to myself warding off fear. I jumped to keep warm. I hopped faster and faster on the stone path, splashing on the new puddles of water until my white socks were no longer dry. Hopefully, some one would come home soon, I prayed. The rain started to pour more evenly and heavily.

With all my will, I prayed to be inside. Realizing that it was stupid of me to walk home by myself, I was scared, I started to cry.

And then I saw my dad. He looked preoccupied. I wonder now where he came from. The babysitter’s? Was he panicked? In oil stained blue overalls, he didn’t notice me until he reached the door, my wet eyes staring back at his. He looked surprised. He reached for his key and let us in.

The days that rained marked the days that I would be with him. He’d wait for me in front of the school where we’d walk home together huddled underneath an umbrella. We played checkers, Connect 4 or puzzles with New England landscapes. He revealed the magic of the Chinese chessboard by explaining how each of the pieces moved like the horse, soldier, elephant. He taught me how to kill the king that moved like a crab or how to effectively cross the river and get into the enemy’s territory. Clapping when I’d take his pieces, he would let me win, occasionally.

The times I saw my father in glasses was when he read the Vietnamese newspapers, slice daikon for soup or when he would call me to lie on his lap and delicately clean my ears. With a copper ear scooper that looked ancient and sacred, he’d gently pull my ear lobe open and softly scrap the walls, putting me in a state where I resembled a paralyzed cat.

Sometimes I’d hear his deep baritone voice singing lyrics from Vietnamese opera called cai luong, songs of filial love and duty. On rainy weekends when both my parents were home, I’d lie sandwiched in between their warm bodies before my Saturday cartoons. My feet touching both their legs.

As I grew older, I spent less and less time with him. I’d get embarrassed by his presence or by his disregard for his appearance, his clothing. He always worked. We had less in common.

My dad never talked about his past. Stories of war and loss, repressed memories come out only in fragments during family meals. I don’t know much about his life back in Vietnam. At my brother's college graduation, he unusually confided that he wanted to go back to visit his ancestral hometown, Long Xuyen. He wants to stand in the same place when he was a little boy taking care of the water buffalo, to come back as an old man and measure the full length of his life like the length of a bamboo spear that he used to herd the buffalo. I hope we go there together.

I think about him often, especially on a day like today. I haven’t forgotten those precious rainy days. And the drops, each falling like a gift of unexpected surprise and love that only my dad could give me. 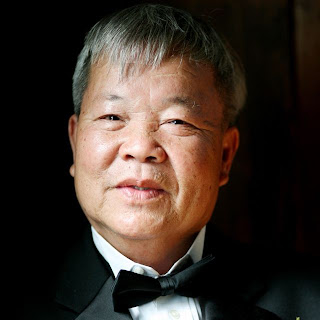