Cleaning out the fridge for the next leg of our journey, I’m left with a serious quandary. What to do with the large bag of pasas (raisins) I’ve bought for yeast making, a bowl of said yeast (that I’m not really motivated to make more bread), a large sack o flour and the biggest slab of butter (the only convenient way to buy butter in San Marcos)…I’ve ever seen in my life?

Hmmmm. [Tapping finger on my chinny chin chin]. I look at the boy.

Pain aux raisins is by far the most ambitious and one of those baking experience where you score a serious touch down when it comes out of the oven and into a salivating mouth.  Did I have enough patience and gumption for the ever so fickle and demanding pâte feuilletée (puff pastry)? How is it physically possible to fold that much butter into flour!? [In my best dirty harry look, I throw some flour over my shoulders]. Bring it! 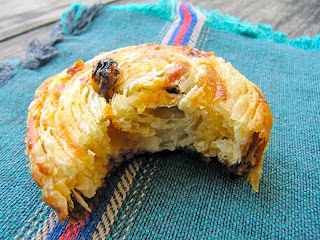 What I’ve learned: The first batch of pain aux raisins was very flaky and….dry like a palmier. The taste and the texture…pretty spot on but I didn’t allow enough time for the dough to proof before baking (it must double in size and especially with homemade yeast, you need to allow, ample, ample space and time for the yeast to do it’s thing). Also, I let the first batch bake for 45 minutes at 180 C / 360 F (which was much too, much time). So, note to self, allow the dough to proof (2-2/1/2 hrs…yes trust me) and use a higher temperature 190 C / 375 F for 25 - 30 mins (what worked for me was to cut the heat at around 25 mins, let sit in the oven for another 5; that did the trick).

The result…..oh la la la, oui, oui! Who needs a parisian bakery, when you can enjoy, these lovelies out of your own oven. Enjoy the recipe & pictures. May the butter gods be with you! Buen prochevo.

For the dough. Create the poolish or sponge. Whisk the yeast, water and 1/3 c flour. Pour the mixture inside a mixer (with a dough blade). Add remaining 2 cups of flour, salt, sugar and milk. Slowly add the ½ c butter.

When the butter is incorporated, remove the dough and let it rest for 1 hour. Punch the dough and allow it to rest in the refrigerator for another 2 hours. 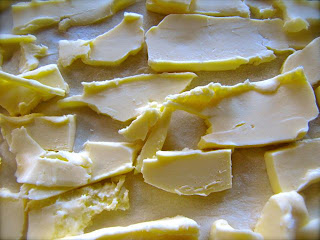 Final assembly. Roll out the chilled dough into a 10in x 12in rectangle. Spread the pastry crème. Add a good handful of raisins to cover the surface. Make sure to add raisins on the side of the dough. Roll into a log. Slice into 1 inch pieces. Place on an oiled tray pan. Allow the dough to proof in a warm place (oven with the light on) for another good 2-2 ½ hours or until it has doubled in size. 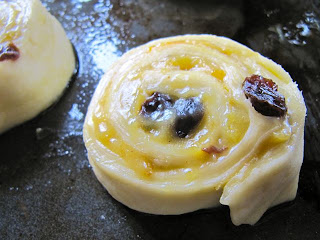 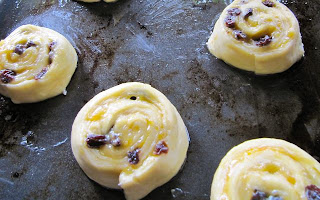 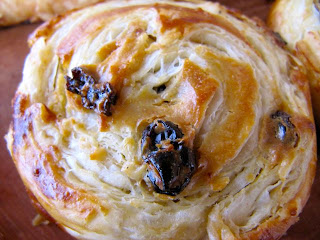 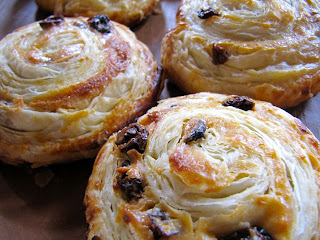 Pin It Email ThisBlogThis!Share to TwitterShare to Facebook
Labels: Food and Recipes