Challah ("hallah") is a beautiful decorative egg bread. I've always wanted to make it...never the opportunity...until a friend visiting and staying with us in Costa Rica suggested making some. Not only was it entertaining, I learned a little bit about the history and tradition of the bread. Challah is customarily eaten for shabbat (the day of rest in the jewish faith)...which begins after sunset...a way to begin Friday's evening meal.

We made 2 loaves. A long braided one and one shaped into a circle (although round challahs are most traditionally used for the Jewish New Year, Rosh Hashanah...) 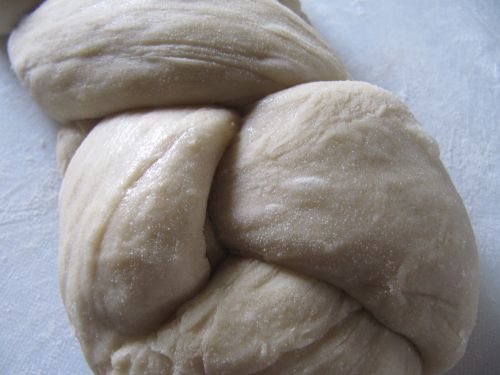 We used some of my homemade yeast made from fermented raisins. We started the dough on Thursday night. Kneaded it a second time the next morning. Shaped it, let it double (more like explode...read tips below in the recipe section)...then brushed it with egg and baked it. After 40 minutes in the oven, the bread smelled goooood. While the loaves rested and cooled, we popped out for a quick walk to watch the sunset on playa carmen...the intensity of the red orb cracked its rays over the blueness of the sky. We'd made it just as the sun sank quicksand into the horizon of the ocean.

We zipped back home anticipating a slice. A little prayer...

"Baruch atah Adonai, eloheinu melech ha'olam, hamotzi lechem min ha'aretz" ("Blessed are you, Adonai, Sovereign of the universe, who brings forth bread from the earth").

The bread came out pretty tasty. A hint of sweetness. And delightful french toast the next day with a little bit of red plum compote on top...the best way to start a Saturday.

Here are the photos and recipe below. A special hallah goes out to baking buddy, Lee. 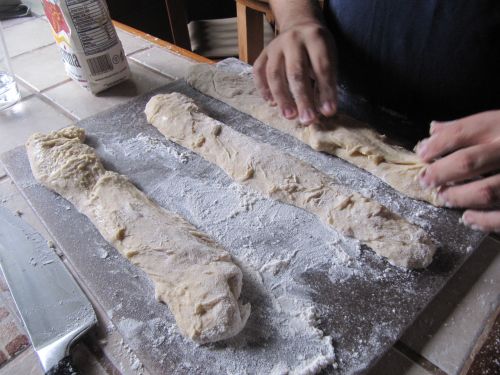 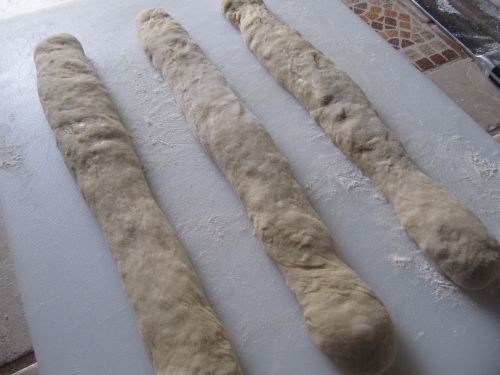 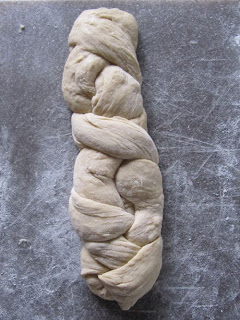 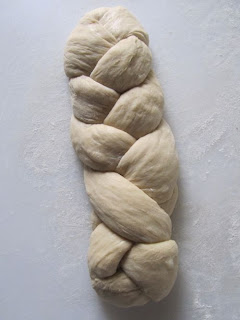 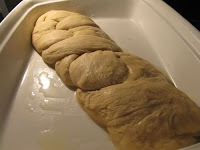 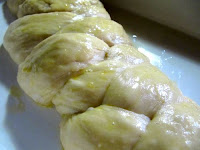 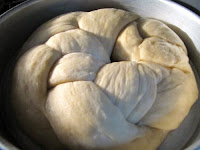 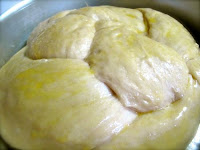 Punch down for a second kneading. Divide into 3 pieces. Roll out to a 9 inch rope. Braid. (Watch the video. 1:20). Rest or allow it to proof on a greased cookie sheet until it doubles again. Brush with egg yoke. Preheat oven to 325 F and bake for 30- 40 mins until golden brown. Let it cool for 30 mins before serving.

Tips
-2 coats of egg yoke is best. One before final proofing and one before baking. After 20 mins in the oven, Lee didn't see any color on the bread. We took out the loaves and gave it another coating for good measure.
-The original recipe calls for 4 eggs...the color wasn't as yellow so I'd wanted it to be...so if I were to make the bread again, I'd add in another egg to get it a nice sunny color.
-On the final proof, after the braiding, we let it rest until it doubled inside the oven with the light on. We found this was not a good idea...especially for tropical humid weather. The bread ended up expanding way too much and the braids ended up disappearing! To save the bread, we reshaped and braided it a second time. Allowed it to rest 30 minutes. Egg washed and baked. But when it came out of the oven, the braid marks were really faint (as you can see in the photos below). Lesson learned, I would do the final proofing in the refrigerator to retain the braids. (Or in my more recent post, super challah #2, make the braids smaller! This is a secret I learned to retain the braids.)
-We inadvertently gave the dough a mini 3rd kneading when we had to rescue the braids...this gave it some good texture and elasticity...not entirely the texture like brioche which is the trademark of a good challah...so, I would definitely give it a good 5 min 3rd kneading to build up the texture and give it that ideal elasticity.
-Finally, line the bottom of the pan with some parchment or something non-stick. (2nd photo below). 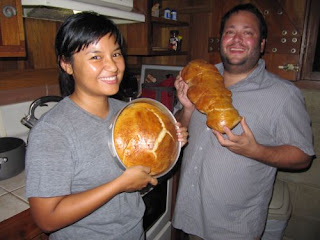 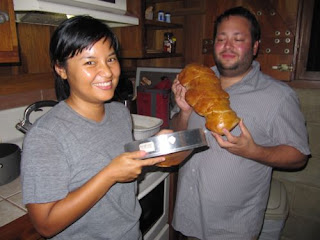 I'll definitely be trying this one!!