“Sweetie, when did you see the high winds sign?” I ask Cedric behind the wheel.

“Well, it looks like we’re approaching it.” I point, straight to the horizon, the brown color of dust descending. We’re heading right in it, into the heart of the sandstorm.

I start to accelerate getting closer to a pack of cars in front of me. Safety in numbers. I can tell by the constant speed of the other cars that we’re among an experienced group because they don’t slow down or accelerate, but maintain speed.

This is going to be a test of fluidity and patience, not just courage.

A brown cloud quickly envelops us and we’re in another world. Inside a snow globe.  Its contents grey and barren shaken by the hands of Mother Nature. Inside a no man’s land. Timeless. A dead calm.

You can feel the surge in the air, in the landscape. Its pulse thick and electrifying; the force of the wind pushes against the SUV. She rocks and thumps on the side. Let me in.

It’s only the beginning.

By now, a row of cars and trucks have pulled over into a rest stop. Bad bad idea. Imagine spending hours just waiting. Waiting for fear to eat you alive. Don’t stop at the beginning of the storm! Better to take the road and push through it. But I don’t want to judge or argue. I’m grateful that there is less people on the road. More space to maneuver the car. Sometimes it is better to stop.

I’m scared, really, really scared but excited and strangely grateful for this moment. What’s going to happen next? It’s out of my control now. Allow it to unfold. Allow the moment to take me, guide me into the storm.

Another rock by the wind. We’re now completely inside this grey and brown world. A faded green sign. Tonopah.

An abandoned home, it’s walls exposed, roofless. Where are they now?

A gas station, but the lights are off...

The ancestors, passed through here. I see them cross through the storm with cattle. The test of a warrior. Don’t fight the wind, move slowly. Those who fought it were blown away, broken down by it. Don’t fight it. Accept it. Take your time. Move into it.

We pass a bridge. A big rig is parked underneath it. Temporarily sheltered. In this wind, it can topple. Another reminder, a lesson before me. When you don’t want to push ahead and take risks. Stop. Waiting it out is ok. The universe will support what ever choice you make. But it’s ok. For me, I don’t want to stop, I’m ready to push on.

The wheel turns on it’s own and the only thing I can do is relax, stay fluid and balanced to keep our course ahead. Keep moving. This wind shifts and moves. From both sides of the car. I feel the surge in my belly now.

Don’t be scared. Move into it. That’s it.

A few drops of water begin to fall. The windshield screeches as it wipes away the  messy tears of the sky. The clouds are cracking open.

There’s a small black bird, it’s body, falling out of the sky, but it manages to move into an upward current. Up it goes before me.

Fuck!!! Tumbleweeds appear out of fucking nowhere???!!! I swerve, avoiding them.

It starts to pour now. Heavily. At any moment, I want to pull over and let Cedric drive. Oh, god, god, take the damn car! I scream inside! But, no, not yet, I can do this.

There’s a white van. I see its form bullied by the wind - knocking it from both sides. It's slowing down.

Do I accelerate? Pass it now?

The hardest is to pass, at any moment I can put us into danger by blinding us, getting side swiped, a waterfall of water on the windshield.

But my gut stops me. Now’s not the time. Wait.

Sure enough, there’s a clearing. Less rain, and I over take the van. My right foot trembles, then presses firmly on the gas. Here we go.

My palms sweat ice from the anticipation - the fear of this impossible - possible act.

That night in Tucson, we celebrate over fried zucchini fries, tuna salad, margaritas and sangria.

It’s 9:30pm, high 90s out. We walk off our stomachs along a dried up creek, a trail along the Windmill hotel.

Our dogs, Manly and Biela run into the desert, their noses investigating the hidden smells inside the shrubs and underground holes.

The night sky, black as a well...walking into its mouth.

Suddenly, a single vein of light. There’s no sound. A white pulse, brilliant dissolves into blackness.

There’s another spark. Early fire works for our pre-fourth of July night.

Cedric counts between the pauses of light and sound. The storm is close. 13 miles.

Fingers finding the pair they were made for...we walk hand and hand.

I realize now why artists come to the desert. To experience the force of Mother Nature. To be reminded by the force of life inside our very own veins.

Never in my lifetime could I imagine this. Being on this journey. Crossing a desert. Being here at this moment. Veins of light pulses like the blood inside my being. Illuminated. The roar of thunder. Life, unpredictable…surges forth.

By the time we reach San Carlos, Mexico, several days on the other side of the border, we see the same lightning and thunder show, the view from a white balcony over looking the calm Sea of Cortez.  It looks peculiarly different on this side. Serene. Colorful. Pink and red against black.

We’d crossed the desert, travelled through the storm and yet, it still follows.

The sky cracking open again and again before us like our open hearts. 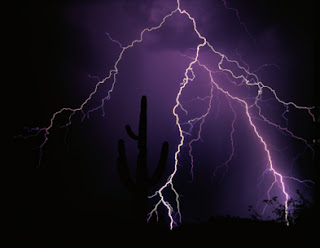